Every year there are more worthy works than could fit on any Hugo Awards ballot. There will therefore
always be works that are not included, no matter how great they may be. As our book club has done in previous years, some of us have selected the books, movies, and comic books they wish could have made this year's ballot.
(KB) Mexican Gothic by Silvia Moreno-Garcia

Set in the 1950s Mexican countryside, college-age Noémi navigates a tense and horrific situation that holds her cousin captive.

Evoking the same style of romantic gothic and speculative fiction horror in Mary Shelley’s Frankenstein, Moreno-Garcia’s carefully crafted novel ratchets the tension and addresses settler-colonialism, environmental racism, and sexism. Using a unique mechanic to bring the eco-gothic setting into the fantasy and science fiction genre, the novel was full of surprises beyond just the plot.

As a horror aficionado (and obviously a SFF fan), this book is an outstandingly creative entry for the speculative fiction subgenres. Moreno-Garcia, whose previous book Gods of Jade and Shadow earned her Nebula and Locus nominations, is an author to keep a closer eye on, and it’s a shame that Mexican Gothic didn’t make it onto Hugo readers’ radars.
(AW) Bridge 108 by Anne Charnock — Best Novel

Not sure how this thoughtful, socially speculative and dystopian novel didn’t make it on the ballot. Anne Charnock gives us interesting and relatable characters that must move forward, both literally and figuratively, to survive in a world struggling with deep social and economic divisions.

Caleb and other point of view characters provide distinct interpretations of the same reality, revealing layers of social conditioning to the reader. But you don't need to care about social relations and labour issues to enjoy this book (even if you should). Despite backstories of despair, each character’s choices reveal an inherent and universal drive to survive without doing harm.

This is near-future climate change fiction at its best — gently disclosing the impact of current conditions and choices through sympathetic experiences and hope.

Repo Virtual is a really great response to anyone that suggests cyberpunk is a finished genre. It takes aim at the giant internet companies dominating the world today and at the precarious labour that allows the world to function. 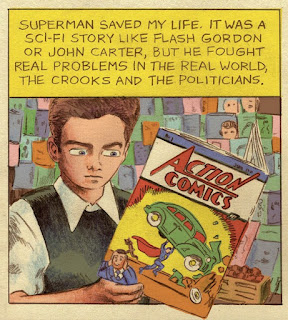 (OR) Jack Kirby: The Epic Life Of The King Of Comics by Tom Scioli — Best Related Work

One of the most visually distinctive artists of the golden age of comics, Jack Kirby helped create a plethora of characters who have gone on to be household names: Iron Man, Captain America, Black Panther, Nick Fury, and The Fantastic Four just to name a few. Elements of his art style echo throughout the Marvel Cinematic Universe. His contributions were often however overshadowed in the popular imagination by his more charismatic colleague Stan Lee. So a volume like “The Epic Life of The King of Comics” provides a welcome insight into who Kirby was, what influenced his genuinely progressive vision for comic books, and what his legacy might be.

Told as a linear chronological narrative, The Epic Life Of the King Of Comics follows Kirby’s service in World War 2, his confrontations and altercations with home-grown American racists, his ascent to the top of his profession, and his fight to claim ownership of his work. It is a story worth reading and understanding for fans of comics, fans of creator’s rights, and fans of the genre in general.

Rather than telling this story through a conventional biography, Tom Scioli offers us a beautifully drawn comic book in which the art carefully offers connotations of Kirby’s style. This artwork is notable for how Scioli helps us see Kirby the way that Kirby saw the world, though he avoids slavishly aping the master’s style.

This is truly one of the great works of comic book history.
(CF) The Unspoken Name by AK Larkwood

This fantasy novel follows the life of Csorwe from dedicated death god mouthpiece and sacrifice to assassin and spy and beyond.

Inspired by Le Guin’s Tombs of Atuan, AK Larkwood’s debut novel The Unspoken Name follows a young orcish death cultist for whom a vast new world becomes possible when she is saved from being a ritual sacrifice. Set on a quest for an artifact of incalculable power, she learns the world is more nuanced and complicated than she had been raised to believe.

Despite this being a debut novel, which earned Larkwood a spot on the ballot for the Astounding Award, this book has better balance of complex worldbuilding with character development than works by far more established authors. While some might complain that the plot isn’t particularly tight, that gives the characters more space to breathe and to grow.

One of the many facets of the book that made it stand out is how Larkwood engages with and subverts the prejudices baked into standard fantasy tropes. Orcs may have a different culture that doesn’t align with that of the dominant (white) majority, but in this narrative it is made clear that they are just as human.

Another facet that adds brilliance to this little gem are the positive queer representation. Both Csorwe and her friend were queer but it was just part of their characters and not used as tokenism for the plot. And in the wider world, there was no institutionalized homophobia.

It is great to see AK Larkwood on the ballot for the Astounding Award, but all the same I would have liked to have seen The Unspoken Name shortlisted for best novel.
at May 29, 2021 No comments:

What a great time to read about a city loved by so many.

For the past year, New York City has been inaccessible to travelers, tourists, and those seeking to commune with its genius loci (though, if Jemisin’s interpretation is correct, this is what the City would prefer). Hardcore urbanists from all over will get a particular thrill from a book like The City We Became, which invokes the boroughs as characters and evokes memories of wanders through their streets.

With a plot kicked off by a young homeless man discovering his destiny as the avatar of New York City, the story involves a larger-scale need to rally the Burroughs to defend urbanism against community-destroying White supremacy in the form of a Lovecraftian horror. This entity lashes out and seeks to destroy New York out of a fear of culturally-rich diverse communities. As with many Lovecraftian horrors, significant elements of the unknown and unknowable are left to the reader’s imagination.

Jemisin’s talent for creating characters we care about surviving and surpassing structural barriers took center stage. Every new superhero needs an origin story and this story provides this by expanding on the creative city hero concept Jemisin introduced in the original short story “The City Born Great.” While a minor quibble, the cameo character Bel seems more Aussie than British to us and no one in our book club remembers seeing a pound sterling note in about three decades. More decisively, the nod to her sensitivity readers in the acknowledgements was appreciated, however some members of the book club felt the characters were reductive and that the narrative occasionally relied on telling the readers rather than showing the heroic status of the protagonists.

This is a novel that is subtly intertextual, paying homage to Neil Gaiman’s Neverwhere, and subverting the works of H.P. Lovecraft. In fact, the allusions to Lovecraft are so integral to the text that the occasional forays into Lovecraftian prose became distracting to at least one of our members. Those who dislike the way Lovecraft wrote may find some of the prose difficult.
But despite being steeped in the ideas behind famous fantasy works, The City We Became sometimes
seems more aligned with the narrative traditions of magical realism; it sometimes isn’t clear where the metaphor ends and what portions of the story are supposed to be read literally. Readers who lean towards more literary novels will likely enjoy this more than those who seek out pulp adventures.

As expected, and true to Jemisin’s style, there's a satisfying through line in The City We Became that illuminates a determinative cultural construction. The divisiveness that we've all seen play out in the US over the past decade or so is simplified to an “urban vs rural” or “white vs non-white” dichotomy in this novel, and we suspect it will play an important role in the next two books. The fact that this tension was not resolved with an unbelievable love-in between the Burroughs (a few of us were dreading that type of ending), and the recognition that spatial and cultural practices, not necessarily political boundaries, provide the glue for urban gestalt provided a graceful end to a fantasy novel focused on character development.

Fantastical stories expect some level of abandon by readers, and for the most part that was easy to do with this book. We were a bit tripped up by a few easy-outs, however, including a pep talk that reminded us of Rhonda Byrne’s The Secret and a few convenient but sticky plot holes filled in by bystanders inexplicably unable to see things or eagerly accepting dubious explanations. American exceptionalism also peeked around a few corners (The repetitious refrain: “this time is different / never happened in the other cities”) but this will likely support the book finding its audience.

Given Jemisin’s well-earned following and the timely depiction of a much-loved survivor city, we are glad to see The City We Became on this year’s Hugo short list.
at May 25, 2021 No comments:

Open Discussion — What's worth considering for the ballot in 2023?

The following list will be updated over the next few months as we read, watch, and listen to Hugo-eligible works for 2023. These are not n...

We acknowledge that the land on which the members of this blog and book club gather is Treaty 6 territory and a traditional meeting ground and home for many Indigenous Peoples, including Cree, Saulteaux, Niitsitapi (Blackfoot), Métis, and Nakota Sioux Peoples. Long before we came to this place, the members of these communities were telling and discussing stories. We are all Treaty people, and are grateful to be able to share our stories here.